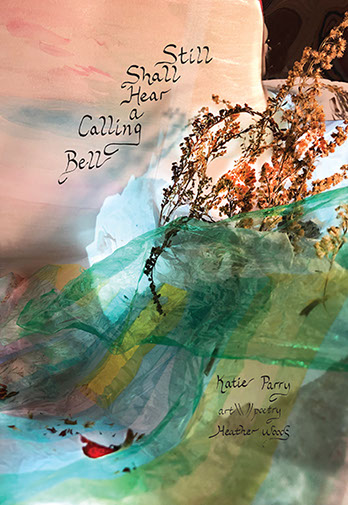 The service of the fruit is precious,

the service of the flower is sweet,

but let my service be the service

of the leaves in its shade

Still Shall Hear a Calling Bell is, at one level, a deeply sensory experience, raising poetry out of its tomb of self-consciousness; at another, it invites you to traverse the same forces of creation that permeate Nature and which unite Man with Spirit. The work shines as a labor of love and feeling, in a way that can only emerge as the fruits of a long and intrepid journey.

Doubtlessly, Katie Parry and Heather Woods’s commemorative collaboration is inspired by the most natural instincts of artistic endeavor, where words are but the grammar of the soul and visuals the gift of inner sight. Time and again, this book takes you to that sacred place where poetry and art and knowledge mesh, unfailingly and with elementary grace, only to lull you into moments of deep and unifying revelation.

Still Shall Hear a Calling Bell is an invocation and a promise—that the power of language and the aesthetics of art are at their best, their most pleasurable, when they move untrammeled along the corridors of the human soul. To read this, is to pause before a deeply mystifying experience, to seek reprieve from the noise and admonitions of the world, to rejoice in the power of literature as it is meant to exist: fiercely independent and urgently moving.

Author of Breathless in Bombay,

Having waited till the fruit is the ripe weight, we may now partake. Heather Woods borrows the term from Li-Young Lee’s “Persimmons,” the poem she and Katie Parry named their magazine for, a gift to Kenyon. This year, the magazine turns twenty-five (a ripe age, indeed, for a small literary magazine) and the college roommates have collaborated on another gift, the poetry and art of Still Shall Hear a Calling Bell. Their book celebrates a reunion of inspired kinship with Lee and Kenyon. In her series of wisdom dialogs, Woods picks up as if she’d never been away. The poetry in A Calling Bell is so radically new it  is already ancient.  She is practiced in the delivery of every loaded brush stroke of ink across a scroll, with plenty of air between lines.

The Kenyon roommates were planting their persimmon tree in soil that recalls, for some, a bitter history.  Sixty years before Woods and Parry graduated from the college, John Crowe Ransom had founded the Kenyon Review. Ransom notoriously returned Robert Duncan’s “African Elegy,” which he had accepted for publication, after reading the poet’s article “The Homosexual in Society.” “We are not in the market for literature of this type,” he wrote in his rejection letter, even though Duncan makes no mention of sexual orientation in the poem. As a young poet in the Seventies, and Robert’s student, I dismissed the Kenyon Review as home to the retro Southern Agrarians, Robert Lowell’s college, aligned with the poetry-world order that seemed ruled over by the likes of the Southern Review and CIA-funded Partisan Review. I sought no place for myself in those magazines. Where Ransom had closed out poets sacred to my developing mind—the Beats, the Black Mountain group, the San Francisco Renaissance, first gen New York writers—the founding editors of new magazines like Persimmons were opening windows and letting the sounds of bells come in. I still hold that to be called by the bell is to believe poetry is a calling.

Author of The Art of the Serial Poem